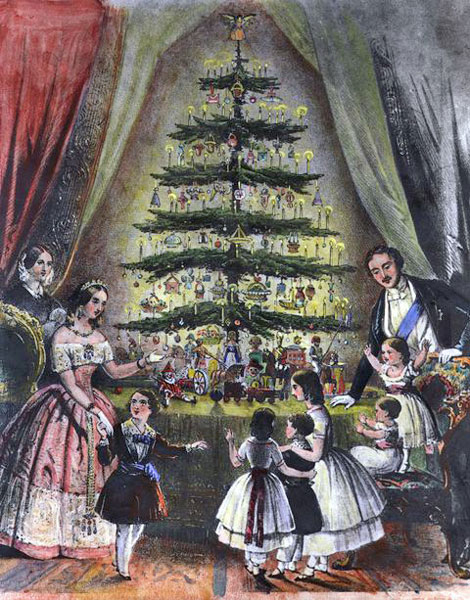 Whether they are traditional evergreens or sparkly, metallic creations, Christmas trees probably represent one of the most symbolic representation of our holiday traditions. Although they are indeed “Christmas trees”, these traditional symbols of the season go back to ancient civilizations.

Long before the advent of Christianity, plants and trees that stayed green all year had a special meaning for people who had to endure a harsh winter. In the midst of snow, or cold, or a change in season, evergreen plants and trees that never changed colour or lost their foliage represented hope and life. So, ancient people hung evergreen branches in their homes with the idea that life and good times would return once again.

In fact, in many countries it also was believed that evergreens would keep away witches, ghosts, evil spirits, and illness. The mysterious Druids decorated their temples with evergreen boughs as a symbol of everlasting life. The Vikings believed evergreens were the special plant of the sun god, Balder.

One of the most important days of the year in the Northern hemisphere became the winter solstice—December 21—when the days began to get longer again. Ancient folk believed that the solstice meant that at last, the sun god would get well. Evergreen boughs reminded them that all green plants would grow again because the sun god was strong and summer would return. They hung evergreen branches to “welcome back” the light.

When Christian traditions spread throughout the world, the date for Christmas Day was selected because it coincided with the winter solstice, which was already an annual festival. Once again, evergreens played a role. In 16th century Germany, devout Christians began to bring decorated evergreen trees into their homes.

Not everyone was on board with the idea, especially in North America, where at one point, Christmas trees were actually banned by Christians!. But the popular Queen Victoria and her German husband, Albert, insisted on having a tree because it was his childhood tradition. The royal family were sketched in the Illustrated London News standing around a Christmas tree. Whatever was done at court immediately became fashionable—not only in Britain, but in North America, which meant the introduction of the modern Christmas tree in the USA and Canada.

Trees take many forms, although the most popular are Scotch Pine, Douglas Fir, Fraser Fir, Balsam Fir, and White Pine. Whatever the preference, there’s truly magic in the idea of putting a tree up in a home. In most families, “tree day” is a highlight, when lights and baubles are brought out of storage and everyone helps make this year’s “the best ever”

Christmas trees are truly a tradition everyone can enjoy. Consider the traditional carol, “Oh Christmas Tree” (“O Tannenbaum”, written in 1824). The lyrics do not actually refer to Christmas or describe a decorated Christmas tree. Instead, they refer to the evergreen quality as a symbol of constancy and faithfulness.