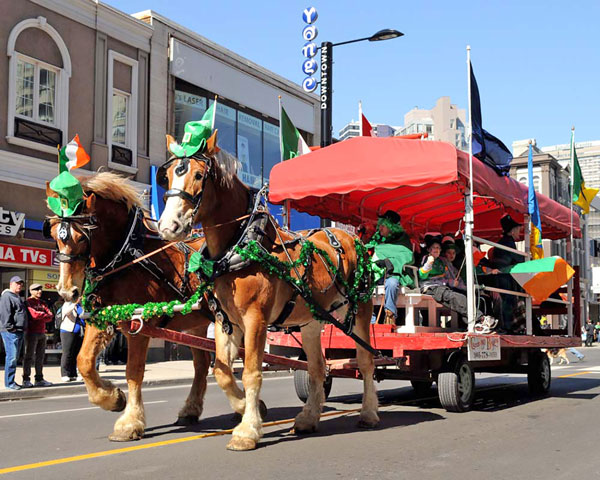 In downtown Toronto, it’s hard not to find British names on streets, or on the many institutions. In fact, our older buildings are designed in classic British architectural styles: Edwardian, Georgian, Victorian. And when you study Toronto’s history, you find that many of our various leaders, architects, educators, writers and artists have British heritage.

Although Toronto was predominantly settled by the British in areas such as the Beaches, East York, Rosedale, Summerhill, etc. there were specific neighbourhoods where individual communities of English, Scotts and Irish settled. For instance, along St. Clair West, known as “little Britain,” there were many English born residents.

Irish Roots – Fleeing famine in Ireland, new Irish immigrants came to Toronto by the thousands. They typically settled in different neighbourhoods, depending on whether they were Irish Catholics (from southern Ireland) or Irish Protestants (from northern Ireland).

Corktown (named after Ireland’s County Cork) attracted Irish Catholics. It was desirable because it was close to jobs at the various breweries, brickyards and mills in the area.

Nearby Cabbagetown was home to a higher concentration of Irish Protestants, which sparked occasional turf skirmishes. Cabbagetown got its name because the Irish were so poor that they grew cabbages on their front lawns.

Scottish Heritage – Each year on January 25, many bars across Toronto celebrate Robbie Burns Day to honour the great Scottish poet.

Many of our beautiful old buildings were designed by Scottish architect William Fraser. Fraser designed office buildings in the Beaux-Arts style for the Toronto General Trust Building, Bay Street at King Street West, and the School of Household Science at the University of Toronto (southeast corner of Avenue Rd. and Bloor St. W.)

Today, there are almost as many Canadians of Scottish heritage (4.7 million) as there are Scots in Scotland (5.3 million).

The St. Andrew’s Society in Toronto was set up in 1836 to welcome and support new Scottish arrivals to the city. The society is still very active today with annual celebrations including the annual St. Andrew’s Charity Ball.