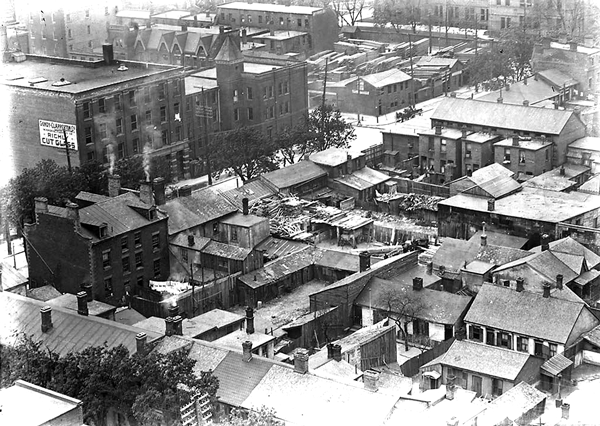 Timeline of Toronto, from the Town of York to today:

The area was bordered by College and Queen Streets, University Avenue and Yonge Street, a location that was easily accessible from the immigrant arrival points at Union Station and the Great Western Station.

Toronto’s first immigrant community was The Ward, which offered lower-cost housing, closer proximity to work, and community acceptance to new immigrants from Europe and Britain. Most arrived without money after fleeing from famine, poverty or war. The Ward also housed the city’s first Chinatown, and also marked the end of the Underground Railroad for many fugitive slaves after the American Civil War.

By 1850, many black families had settled in The Ward; five years later, the total black population grew to 539.

Life was extremely difficult in the area. It was overcrowded, home to the poorest in the city, and referred by many as “the slum”. Although there are no signs of The Ward today, daily life was captured by Canadian painter Lawren Harris, who often painted pictures of the various houses and streets in The Ward. You can see some of these works at the AGO as part of the permanent display.

Around the turn of the century, eight acres of The Ward were expropriated to make way for city buildings, first the Old City Hall and the New City Hall.

The neighbourhood also began to change in character. As the Jewish immigrants became more settled, they moved westwards to the Kensington Market area and The Ward increasingly became a centre for Italian immigrants, who were then arriving in great numbers. The Italians also moved west to what is today Little Italy. Central Neighbourhood House was established in 1911 as a settlement house to assist new immigrants in The Ward.

Today, the key landmarks in the original Ward include: City Hall, the Hospital for Sick Children and the Toronto Eaton Centre.