The City of Toronto has been described as Canada’s crown jewel of multiculturalism, a sparkling, rich, colourful and precious treasure. Toronto has many well-known neighbourhoods like Portugal Village, Greektown, Little India, Little Italy, and spread across the city are large communities with Chinese, Jewish, Filipino, Sri Lankan and West Indian residents.

In this multi-part series, we will be featuring some of Toronto’s vibrant cultures. 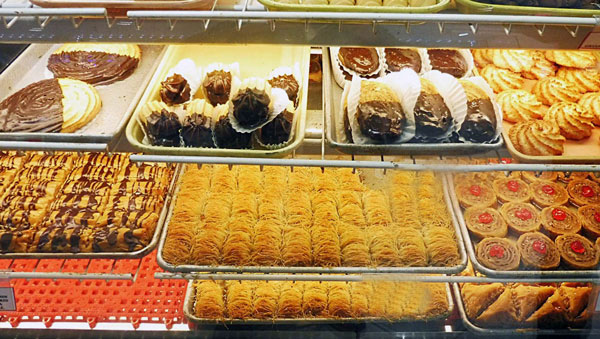 The Greek influence in Toronto is hard to miss. Just visit Danforth Avenue east of Broadview Avenue and enjoy the many cafes, restaurants, ice cream parlours, souvlaki houses, fruit stores and shops of “Greek Town”. There’s the familiar blue and white from the Greek flag everywhere you look. Try and read the Greek names on signs, such as Omonia, Acropolis, Kalyvia, Alexandros, Parthenon. You may stop to sample some Greek food, perhaps souvlaki, gyros and tzatziki. At a cafe, enjoy strong coffee, or at a tavern, while listening to bouzouki music, a glass of Ouzo.

The largest number of Greek immigrants arrived in Toronto following the Greek military junta of 1967-74. The new Canadians typically were entrepreneurs who opened various businesses along Toronto’s Danforth Avenue, where in the 1960s, the Greek community officially sprang to life.

Today, Greektown on the Danforth is the largest Hellenic business community in North America and indeed is the third largest in the world after Greece and Melbourne, Australia. It has earned notoriety in various ways. The Danforth is mentioned in a Barenaked Ladies song, “The Old Apartment”, and several scenes in the movie My Big Fat Greek Wedding were shot in the area.

Although many settled in the Danforth East area, this is not the only Greek community in Toronto. According to the Canadian census, there are actually 10 neighbourhoods in Toronto where Greek is the mother tongue, including several areas in and around East York and Scarborough.

As you travel around Toronto, you’ll see many Greek influences in sights, sounds, and entertainment. For example, various buildings are designed in Greek revival architecture, with columns or pilasters, symmetry and usually white in colour. The Toronto Post Office is one of the best examples, although you’ll also notice the design components on many banks, public institutions as well as residential homes.

Torontonians also love what we now import from Greece, much of which we use in our cooking! Canadian merchandise imports from Greece include preserved food products, fats and oils (mainly olive oil!).