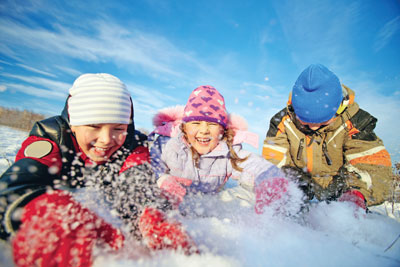 Can you remember a year before “March Break?” The idea of giving students (and teachers) a week-long holiday didn’t happen in North America until the 1930s. Apparently, it all began in Fort Lauderdale, Florida when a New York swim coach was looking for a warm place to keep his swimmers in shape over the winter. The phrase “spring break” (used more in the USA than in Canada) was first introduced in the 1960s movie Where the Boys Are.

Today, students across the US and Canada have some kind of mid-winter break. In fact, over a million students travel to “hot spots” such as Mexico and Florida on Spring Break. Most elementary and secondary school students in Canada get either one or two weeks off some time in March or April. Post-secondary students are generally given one week off, often called reading week, some time in February.

Although mostly scheduled during March in Canada, the mid-winter break in Saskatchewan and Newfoundland takes place in April. Students in Yellowknife, North West Territories are off 2 weeks in March, but enjoy a month long winter festival. Students in Iqaluit get one week off in February.

One of the best aspects of March Break in Toronto are the many activities available for all ages. Here is just a small sampling.

Skating in the Neighbourhood

There is nothing more Canadian than skating on an outdoor rink! It’s a great activity to spend with friends and family plus a terrific aerobic workout. The City of Toronto has 54 outdoor rinks open, in most cases, 9am to 10pm, seven days a week through the winter season. Hours may vary according to location.

For a complete list of rinks and schedules, visit toronto.ca/skate or call 311.