The Red Brick Castle – A refuge for kids of all ages 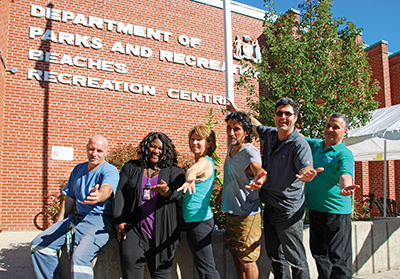 You may not know 6 Williamson Road but surely most know the red brick building of the Beaches Recreation Centre. For 42 years, the centre has been “the place” for children and adults to play, learn and get fit in a safe and friendly environment.

Many children, such as Frank Domagala, then just 5-years old were welcomed on opening day in 1972 by staffer Alf Grigg, it became a “refuge of recreation — a place to meet new people, participate in an endless list of programs, and work out youthful frustrations while building the foundations of our future.”
Frank had a secret sense of ownership of the ‘red brick castle’, as his father Gene Domagala, was vital in helping it become a reality. 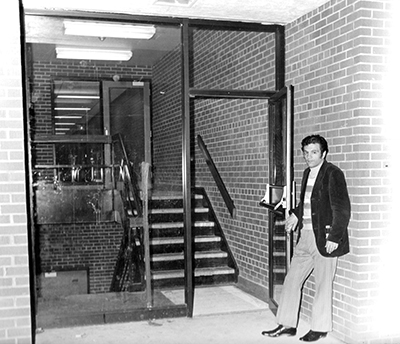 A Dream and a Plan
Settling in the neigbourhood with his young family in 1968, Gene carried with him the values learned in his youth and became active in his new community. Friends from across town questioned his move stating “it’s so far; there’s nothing out there,” he decided to do something about it.

Gene recalled the importance and benefits of local community centres from his troubled youth in the Trinity Bellwoods area, where he’d discovered places like the Columbus Boys Club, Trinity Recreation Centre, and Stanley Park. They provided an essential service to every age, ability, and culture in Toronto.

With the efforts of a group of like-minded individuals, a plan for the Beaches Recreation Centre came to fruition.

Frank, his siblings, and friends such as old pal Roland Roushias, who is running the centre with Frank today, were eager to participate in swimming lessons, drama, floor hockey, softball, etc. As they and their many new acquaintances grew, they’d hang out in the games room playing bumper pool with rock and roll music booming from the stereo.

Like many others, as a teenager Frank began vol-unteering. He was hired as a pool lifeguard in 1984. Upon becoming a father, he registered his children for programs at the centre.

Over the years, Frank Domagala learned a lot while working in other communities, sharing similar stories with mentors and colleagues about their local facilities. “Recreation has become a part of the fabric of who we are, it’s in our blood.”

Generational Changes
The red brick building has remained the same, but its programs and facilities have changed to meet the needs of each new generation.

In the 1970s and early ‘80s the Beaches Recreation Centre was renowned as an aquatic powerhouse with a roster of swim team champions. As fitness grew in popularity, cutting-edge exercise classes and an upgraded weight room produced registration line-ups around the block.

The centre now offers a large variety of activities and programs such as dance, art, sports, fitness and recreational games. They also accommodate events such as fundraisers, special celebrations and Town Hall meetings. Some of the biggest events include the Spring Sprint, Halloween Haunted House, and Christmas Pancake Breakfast. All these activities and events have become integral to the life of the facility.

It Takes a Community Centre to Raise a Child
Over the years, Beaches Recreation Centre with its active advisory council, volunteers and many local organizations, has remained the hub of neighbourhood activity.

Dozens of managers and full time ‘reckies’ across the city, have put in their time at Beaches Recreation Centre. They continue to remark upon the positive effects that this little place and its vibrant community has had on their lives.

Reflecting upon the many success stories of how this facility has supported people with life’s struggles, Frank Domagala is reminded of a time when a father entered with his young son. Recognizing that trouble was no stranger to the boy, Frank took the time to encourage the boy. Years later, that same boy is now a father who comes to the centre with his own son.

Like young Frank, every season there is certain to be another 5-year old, hesitantly entering the same door of the ‘red brick castle’ for the first time, cautiously peering around, and stepping apprehensively into the echoing front hall. Just as certain, Frank, Roland, and the staff will offer big smiles, a round of applause and say, “Welcome to Beaches, the best place in Toronto. Come on in!”