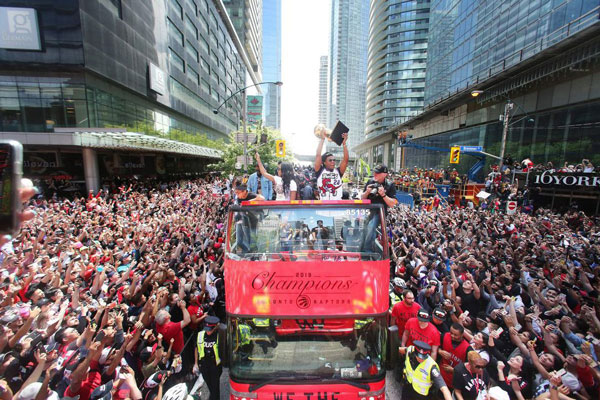 It was one of those moments when we all remember where we were, perhaps in our favourite restaurant or bar, gathered at a friend’s place, or at home in front of the television. A Toronto team made global sport’s news, something we haven’t seen in many years.

Many remember the Blue Jays World Series victories in 1992 and 1993, or the 1972 Paul Henderson goal that won the Team Canada vs. Russia Hockey Summit, or way back—1967 —when the Toronto Maple Leafs won the Stanley Cup. Now, as of June 2019, once again we have seen one of our sports teams go all the way to becoming league champions!

A Bit of History
The Raptors were founded in 1995 as part of the NBA’s expansion into Canada. For much of their existence, the Raptors seemed like outsiders. They are the only club in the NBA outside of the United States. They also started out in a country, even a city, that didn’t pay a lot of attention to basketball compared to sports like hockey.

Like most expansion teams, they struggled in their early years, finishing in last place until they signed Vince Carter in 1998. Carter led the team to their first playoff series win 3 years later.

WeTheNorth Begins
As interest in the team grew, another piece of magic was happening. Attendance at games started to increase to league-attendance records. Fans attending the games also caught on to “basketball” culture. Sports’ announcers remember when fans politely clapped when the Raptors scored points. Now fans were shouting with excitement and calling out basketball cheers, like D-Fence!

As Raptors interest continued to grow, so did the brand. In 2013, Maple Leaf Sports & Entertainment launched the #WeTheNorth campaign, possibly the largest rebranding effort in Canadian sports history. That same year, Canadian rapper and entertainer, Drake, signed on with the Raptors as the team’s global ambassador.

Success at Last
Despite growing interest and some success, the Raptors couldn’t get too far into the play-offs without losing to one of the US-favourites. Then a few things changed. Assistant coach Nick Nurse was moved up to Head Coach, the team hired a new president, Masai Ujiri, and the team acquired Kawhi Leonard and Danny Green. The rest, of course, is history.

Today, interest in basketball across Canada has never been higher. With six players selected in the 2019 NBA Draft, Canada now holds the record for most draftees from a non-US country in a single year.

Though basketball was invented in Canada, the sport has largely remained out of the spotlight in its hockey-mad birthplace. But with the Toronto Raptors winning and more Canadian players making their mark on the NBA, more Canadians are playing basketball and watching the game.

The popularity of the sport in Canada has increased, with fans united under the “We The North” tagline.

Raptors, you made history!