When did Santa Claus Start Coming to Town? 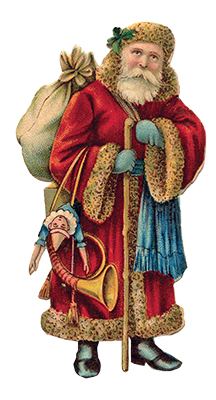 Every December 24th, millions are visited by a man in a red suit. We see him in advertising, parades, department stores and television specials. Santa Claus, Kris Kringle, Old Saint Nick – but who is this guy?

It’s believed that St. Nicholas lived in 4th century Turkey as the bishop of Myra. Credited with doing numerous miracles, he later became a saint and was given his own “feast day”, celebrated on December 6th.

At about the same time, Pope Julius I decided to establish a date for the birth of Jesus. The actual date was unknown, so he decided on December 25th. A pagan festival also was held each year at this time so the Pope hoped to use the holiday to Christianize the celebration.
Eventually, Saint Nicholas’s feast day also became associated with December 25th and his connection with Christmas was established. The tradition of him visiting homes on Christmas Eve developed and children would place nuts, apples, sweets and other items around the house to welcome him.

The Dutch called him Sinterklaas, and it was their settlers that brought the tradition of Saint Nicholas to New Amsterdam (which was later renamed New York).

In 1809 Washington Irving (of Sleepy Hollow fame) included him in a comic History of New York City. John Pintard, founder of the New York Historical Society, interested in the legend, hosted its first St. Nicholas anniversary dinner in 1810. Artist Alexander Anderson was commissioned to draw an image of the Saint for the dinner. Still shown as a religious figure, he now was clearly depositing gifts in children’s stockings, hung by the fireplace to dry. 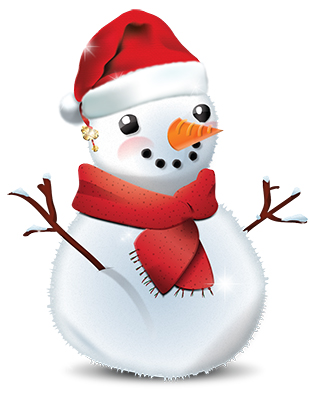 Arguably, nothing established the image of Santa Claus as a poem entitled “A Visit from St. Nicholas” by Clement Moore in 1822. In the poem, the Saint was seen as a tiny man with a sleigh drawn by eight miniature reindeer. They flew him from house to house where he came down the chimney to fill stockings hung by the fireplace with gifts. It has been reprinted countless times under the more familiar title, “’Twas The Night Before Christmas”.

As time went on, the legend grew. Thomas Nast, a 19th century cartoonist, did a series of drawings for Harper’s Weekly where Santa was living at the North Pole with a workshop for building toys and a large book filled with the names of children who had been naughty or nice.

The 19th century Santa was often shown wearing outfits of different colours, by the beginning of the 20th century the standard image of Santa Claus was a man in a red suit trimmed with white. 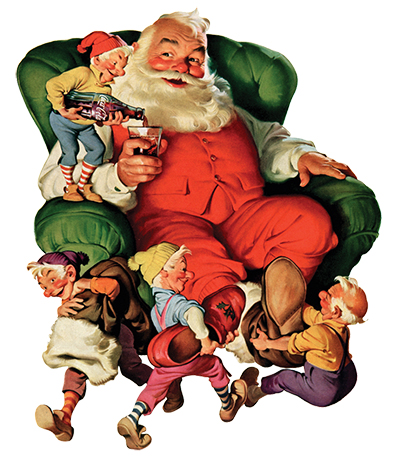 Coca-Cola has often been credited for the image of Santa wearing red and white in 1940s ads, however, he was already well associated with these colours due to a number of paintings by Norman Rockwell in 1921.

Believe in the man or not, it’s truly up to the individual. The magic of the holiday season is so enchanting, that the idea of a “Santa Claus” is not only possible but probable.