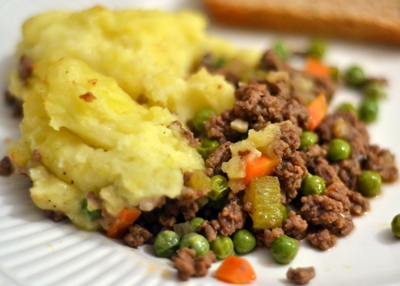 An old favourite from the United Kingdom is cottage or shepherd’s pie. It’s a tasty ground meat dish topped with mashed potatoes that most of us remember from our school days. Shepherd’s pie should actually be made with ground lamb; “cottage pie” is what the dish is called when it is made with beef. But these days, most people just call it shepherd’s pie (although made with beef).

It began as a food that peasants prepared in England because it was inexpensive and potatoes were plentiful. Today shepherd’s pie is known world-wide. In fact, Indian cooks once considered shepherd’s pie to be a perfect dish for tiffin (a word used to mean a light snack in British India).

There are many variations depending on where the dish is made.

In Scotland, pastry is used instead of potatoes. In northern England, the potato topping is covered in breadcrumbs; which turns the dish into a “Cumberland pie”. In Quebec, it is known as Pâté Chinois (Chinese pie), so called because it was first prepared by Chinese railway workers in Quebec. Pâté Chinois usually calls for a layer of creamed corn under the potato topping.

Basic Shepherd’s Pie
The meat part of the dish is made by cooking ground meat (beef or lamb) together with onions, vegetables, broth, spices and often some tomato paste.

Mashed potatoes are prepared separately and spread on top, then the entire dish is baked in the oven until steaming hot.