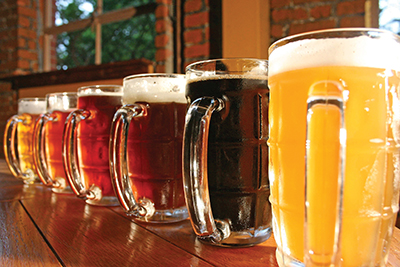 The beer landscape is changing rapidly in Canada. Craft beer is becoming mainstream. This popularity has a large number of craft brewers vying for your attention.

Beer enthusiasts everywhere agree that the popularity of craft beer is surging. There are more brands, more awareness, more promotion, higher availability. In Ontario, this can be traced to several factors.

First, there is wide choice of fresh ingredients. Craft beer has a base of malted barley, hops, yeast and water. Both barley and hops are increasingly grown in Ontario. Harvest fruits and vegetables, spices, honey, hemp, maple syrup, coffee and other natural ingredients are locally produced and easily sourced, encouraging unending innovation by entrepreneurial brewers.

There is also a growing demand from beer drinkers. People are looking for different types of beer for different occasions. They’ll choose one taste when watching a football game and then pair the right beer with whatever is on the barbecue.

In 2005, several independents joined forces under the name Ontario Craft Brewers. This association gives a collective voice and is integral in moving the industry forward.
The Ontario government has also been an active supporter, aiming to help grow a strong craft beer industry in the province as it did with Ontario’s wine industry.

The word is getting out. Studies show awareness of Ontario craft brewers increased from 20 per cent to 80 per cent in four years.

You can also go on craft brewer tours and tastings around the province, attend brewing competitions and beer festivals.

Here are some things to look for in the coming year: