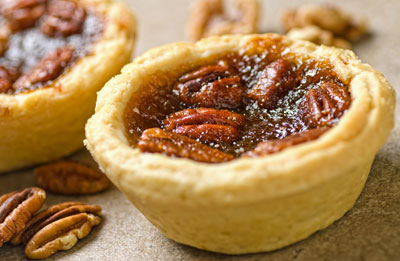 The buttertart is quintessentially Canadian. For well over a hundred years, it has been associated with Canadian cooks. The earliest printed recipes go back to the 1900s, but we know that this traditional dessert was made much earlier by settlers, both English and French (in French it is known as tarte au sucre or treacle tart). Most food historians figure it is because the butter tart uses ingredients that the early colonies had on hand – butter, eggs, flour, sugar.

During the 1920 and 30s, butter tarts were all the rage to have with a cup of tea or served as a sweet treat at the end of lunch or dinner. Housewives compared recipes and kept “secret” the way they made their own version of the butter tart.

There are countless variations. The biggest debate is whether or not you like a tart that is runny or firm. Others debate whether or not you should add raisins. One chef says, “The butter tart has as many recipes as there are people who make them,” But whether it’s a filling made with maple syrup or corn syrup is very particular to the [baker]. Some swear by lard pastry, others by butter. But to call it a butter tart, you can’t change the shape or syrupy filling.”

Of course, you can always buy premade shells.