The Long & Short of Home Projectors 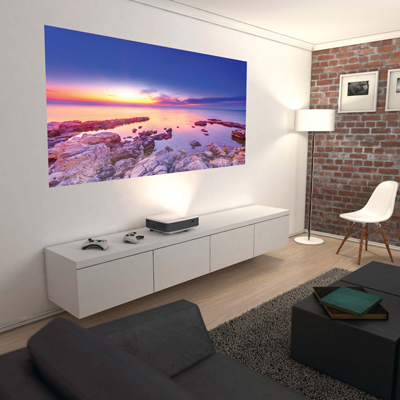 If you are considering a home theatre, you can join the majority with a large television or really get the theatre feel with a high-definition projector.

There are questions you should ask yourself, such as: brightness, resolution, can it be mounted on the ceiling, but one big factor is how big is your room and how large a screen can you project onto? In the past, you would need a fairly large room to fit a big screen, but not anymore.

Throw is the amount of distance needed between the projector and the screen to get the display size you desire. There are long throw, short throw and ultra-short throw projectors on the market to best suit your home environment. Of course, the shorter the throw, the more the devise will cost.

The projector’s throw distance is decided by its lens. Long throws generally being cheaper to build due to the quality of glass.

All lens measurements are determined by how much distance the projector needs from the screen to create a 100″ image:

Which is Right for You?

Long throw projectors can be cheaper than short throw models, but they don’t lend themselves too well to home theaters when there’s only so much space between your couch and the opposing wall.

Short throws are great for family-room set-ups, but comes at a cost. Also, short throws don’t adapt as well to further projection distances. If you think you may use your projector for other projects outside of a home, a long throw might be the better choice.

Ultimately, it’s up to you, your space and where you will be using your projector. Once you’ve decided, this type of home theatre experience is the real deal – a great way to enjoy your favourite films and high-definition sporting events.