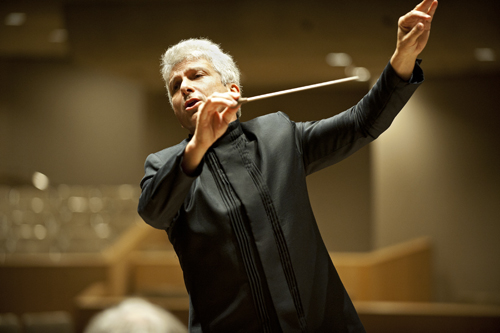 World-renowned and beloved by those he has worked with and entertained,Canadian violinist, conductor, and music director, Peter Oundjian is celebrating ten years with the Toronto Symphony Orchestra (TSO). Under his stewardship, the TSO has flourished, attracting new audiences, earning rave reviews, and a European concert tour this summer.

Born in Toronto, Peter, the youngest of  five children, was raised and educated in England. He acquired his love of music as a child; it was always a part of his family. His father, the owner of a carpet business, played piano. While his sister also chose to play piano, Peter found his musical voice through the violin.

At age 17, Peter enrolled at Royal College of Music in London to study full time. At 19, legendary violinist, Pinchas Zuckerman encouraged Peter to venture to New York, to study at the Juilliard School with Itzhak Perlman and Dorothy DeLay. Though Peter intended to stay for just one year, he never moved back to London.

For 14 years, Peter played with the renowned Tokyo Quartet, which included a concert at La Scala Opera House in Milan — the only quartet to receive this honor.

In his mid 30’s, he experienced a major career disruption. Having performed around 2,000 concerts, he developed focal dystonia, which caused a lack of control and balance in his hand. He was no longer able to play the violin. Choosing to “create opportunity for yourself in life,” Peter decided in 1995 to turn this setback into something positive, seizing upon another love, conducting.

From 1998 to 2002 Peter held the post of artistic director for the Nieuw Sinfonietta in Amsterdam. Currently, he is the music director of the Royal Scottish Symphony Orchestra and travels the world as a guest conductor for other orchestras.

Peter was appointed head of the TSO in 2003, when the TSO was going through some tough challenges;. He returned to Toronto and officially took up the position in 2004. He viewed this opportunity as a homecoming.

Peter conducts 10 to 11 weeks a year at the TSO concerts. His role as music director has him wearing many hats, including conducting, managing personnel, and fund-raising. Over the last 10 years he’s hired 31 new orchestra members and taken some well-considered gambles in an effort to improve the orchestra and expand the audience for classical music, believing “No risk; no reward” — creating new programs and a favorable environment to attract broader and younger listeners.

He established TSOUNDCHECK, allowing anyone between the ages of 15 to 35 to attend a TSO concert for just $14. “It is so important to bring music to young people,” says Peter, “and make it accessible to them.”

This August, Peter will take the 90-member TSO to Europe including Amsterdam, Vienna, Iceland and many more. He champions the idea that the TSO should establish a greater profile in Europe and feels the orchestra serves as an ambassador for Toronto and Canada.

On a Personal Note

Acknowledging a passion for each musical piece heard, Peter considers his favourite composer to be whoever created the music currently being played. However, the works of Anton Bruckner rate high on his list; music he describes as both mesmerizing and meditative. One of his most “magical performances” with the TSO was playing Bruckner’s 3rd and 8th symphonies. This season features Bruckner’s 7th symphony. As well, Peter is considering the possibility of a Bruckner Festival sometime in the future.

When not immersed in music, Peter enjoys sports; playing and attending tennis, hockey, and baseball. He recently pitched the opening ball at a Blue Jays game. 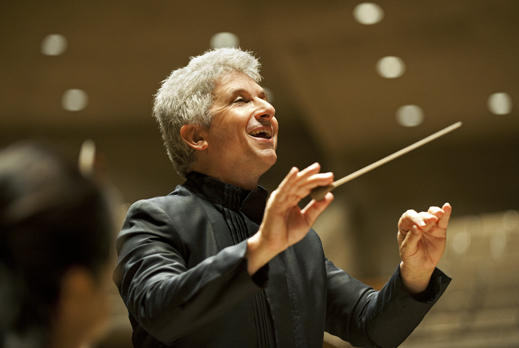 With Father’s Day in mind, Peter shared some thoughts on his father’s greatest influence: to be considerate toward others.

As a father himself, Peter is very close to his two children. His son Peter is a singer, guitar player, and like his father, loves sports, which they eagerly discuss whenever they’re together. His daughter Lara is a musical theatre professional with an interest in psychology; something they are both passionate about and discuss often.

Peter is a strong believer in what music can do to help strengthen everyone’s abilities by teaching focus and commitment. He considers the qualities of great performers to be modesty, confidence, and fearlessness.

“My message to young people,” says Peter, “is that they need to commit themselves to discovering things on a deeper level. They need to understand that application is needed to develop skills. In order to reap greater rewards they need to immerse themselves into their life and careers.”

For those new or unfamiliar with symphonic music, Peter encourages, “Have no fear, everyone is welcome and it is informal — just relax and enjoy.”