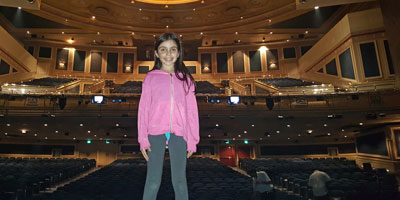 Canadian child star and Toronto resident, Jenna Weir, sings, dances and acts the lead role in the Toronto production of Matilda: The Musical. After its 26 week run at the Ed Mirvish Theatre, this energetic 10 year old has taken the role on the road with the US Equity National Touring Company.

Jenna has always loved to sing. At an early age, her parents Heather and Andrew noticed that she had an uncanny talent to replicate songs she heard on the radio, and in perfect pitch.  Anytime she sang in public, like a school play, people would stop and pay attention. “We began to realize that she had a unique ability,” says her dad, Andrew.

Jenna begins her day in California with some time to relax, until it’s time for her tutor from 1 to 4 pm. She then gets a break after 4, before heading to the theatre for the evening performance.  “The most fun part,” she says, “is meeting so many new people and having so many new-found friends where ever I go.”  And even though over the next six months she’ll be away from her home, friends and classmates at the Claude Watson School for the Arts, she keeps in touch through SnapChat and Instagram.”

It’s been quite the year for the little girl from Toronto.

It all started last spring when Jenna and her family found out she’d landed the role of Matilda in the Toronto Production being brought here by Mirvish Productions. Produced by the Royal Shakespeare Company and the Dodgers, the Toronto production would have an all-Canadian cast.

Jenna’s family read the announcement. It had been a couple of years ago since her mother and older sister first saw Matilda: The Musical. on Broadway and thought how ideal the role would be for Jenna. All of a sudden, the idea was more than a dream and Jenna signed up for the auditions.

“There were many talented children who auditioned,” said Andrew, “but we watched her make the final 20, then ten, then 5, and suddenly it became very, very real.” 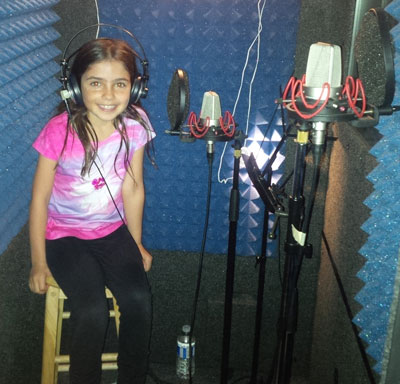 Once she landed the role, Jenna then faced another challenge. She had to keep her fantastic news confidential until the entire cast was announced about a month later. Then it was off to New York City where she would learn the role over two weeks, and then travel with the touring company in order to continue her training. At the final performance at the Boston Opera House, she was given the chance to actually sing the role on stage. Her entire family, mother, father, brother and sister all attended.

“There are no words for what it feels like to see your daughter on stage, and watch 2,000 people jump to their feet and applaud at the end of the performance,” says Andrew.

“I’m like Matilda in a few ways,” says Jenna, “We both have a big imagination, like to read a lot and love to tell stories.”

The last performance this past January 7 was bittersweet as Jenna wanted to keep going. And that is exactly what happened. She was immediately asked if she’d like to join the US tour starting in Albuquerque, New Mexico?

During the current tour, Jenna receives three hours of tutoring a day. Given that there are 12 kids in the cast, she’s not the only one. Her parents both compliment the theatre company for the respect they show the kids. “They treat them as professionals, which they are,” says Andrew, “but they also remember they are kids.”

It’s not just the creative, performance experience that has been so wonderful for Jenna, “the exposure to media, being part of a professional organization, meeting people – it’s a true life learning experience.”

As for Jenna, she enjoys her fellow cast members and the different theatres. She describes the Segerstrom Center for the Arts, where they are currently performing in Orange County, California, as Dr. Seuss-like with all its modern curvy walls and architectural angles.  “And it is so much roomier back stage than the Popejoy Hall in Albuquerque.”

Jenna began to land singing jobs, such as the voice of Priscilla the Porcupine on the Family Junior Channel’s Playdate, and the introductory song over the subtitles of American Gothic Film, Crimson Peak.

As for ideas about future roles? “I’ve got five more months ahead of me as Matilda,” she replies with so much poise and maturity one forgets she is only ten, “I think I’ll just focus on what I’m doing now.”