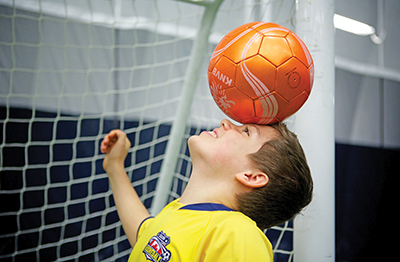 When Michael Thornton first started to play recreational soccer at the Beach Community Soccer League, it didn’t take long before parents and coaches alike began to notice that he wasn’t any ordinary soccer player. Even at a young age, Michael demonstrated the agility, speed and competitive spirit needed to play with the best in the world.

What is not so obvious about Michael when he’s on the soccer field is his life challenges.

“When Michael was 6,” explains his mother Debbie, “he developed Type 1 Diabetes.  I didn’t actually want him to participate in any sports but my husband said, ‘let him live his life like other kids,’ so we put him into soccer.”

“After going through the learning curve and accepting the fact that I have to live with this disease, I was determined to make the best of it,” explains Michael. “I was blessed with many talents and felt that it was important to continue to live my life to its fullest not letting diabetes get in my way of goals and dreams”. 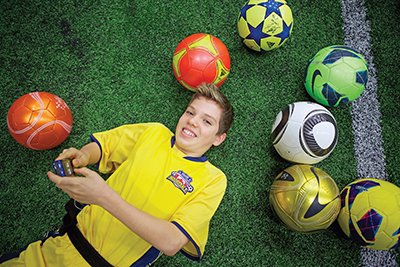 “I want to show the world that diabetes will not stop me from being the best I can be and every success I have is not only for me but for everyone that has to live with diabetes.”

The rest, as they say, is history. Coaches, soccer clubs, and international scouts, noticed that Michael was a superstar in the making. A major breakthrough came when he participated in his first youth trial at the famous AS Roma Club in Italy. “That really opened the door for him in Europe,” says his mother, “He proved then that he could keep up with the European kids. The results of his trial caused real interest among the other major European clubs as well.”

The other trials included some of the world’s most renowned clubs – Manchester City, AS Roma, Inter Milan, Sampdoria and Paris Saint-Germain.

Apart from his success in soccer, Michael has become an advocate for Juvenile Diabetes. He was captain of the Canadian Youth Diabetic Team that competed this year in Switzerland, and he often speaks to young kids newly diagnosed with the disease about not letting diabetes get in the way of ‘going for their dreams.’

Young Michael is no stranger to many, especially among those with Diabetes. He has been featured on CBC television, the Toronto Star and recently been filmed by a Chinese television network about his challenges and achievements.

Even when he made an impact during soccer trials in Italy, the newspaper the next day highlighted the fact that he was Canadian and a diabetic! Michael also is able to use his notoriety as a young soccer star to influence how diabetes is viewed in this country. Last fall when he met Prime Minister Stephen Harper, they talked about future funding for Juvenile Diabetes.

Now it looks like Michael’s dreams are unfolding. This summer, the Thornton family has decided that it’s time to move the entire family to live in Europe where Michael can have the benefit of more soccer opportunities. “There, he will be challenged more and be able to compete against the best young players in the world,” explains Debbie, “he will develop and become a better player.” The move will also be beneficial for their other sons David (youngest) and Christopher (eldest), one who enjoys soccer, and the other, art.

“We’ve decided that life is short, so we might as well live it to the fullest,” says Debbie.

As for Michael, he can’t wait. “He’s pushing us to get to Europe so he can become the best he can be.”

The Thornton family members are all “Beachers”. Michael attended Kew Beach Public School and currently is at St. Denis Catholic School for grade 8. This summer, apart from attending an international soccer camp in Oakville, Michael is preparing to go to Venezuela this fall to represent Canada in the Jr. World Futsal Tournament in October 2013 (a variation on soccer).