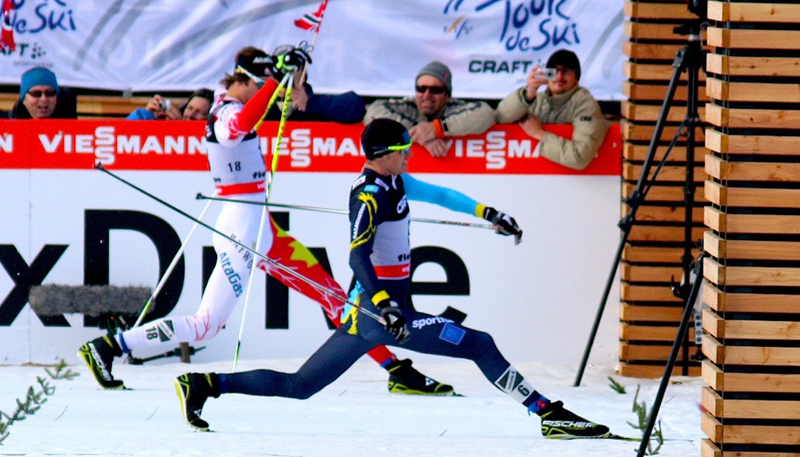 All eyes will be on Sochi for the next two weeks. Who will you be watching and cheering  for? Be sure to keep your eyes on Canada’s Cross Country Ski Team with our very own Len Valjas, native to Toronto, as he kicks and glides at the upcoming Olympic Games.

Born and raised in Toronto, Lenny started skiing at an early age of 2 or 3 in his family’s backyard. Very soon, Lenny is kicking and gliding on groomed cross country ski trails, with his father, at places like Hardwood Hill.

His passion for skiing rubbed off from his father who loved recreational skiing. At one point, no one would have ever imagined that Lenny would have reached the World Cup podium as part of Canada’s four-man team. At 6’6”, Lenny has always been tall but not very strong. He was often far back in the pack – often 40th place or further. But his love for skiing kept him going and no one’s opinion would change his mind.

Lenny’s persistence started to show results at the age of 17, during high school. He was skiing faster and faster and would train at anytime that he could fi nd. He was now leading the pack. 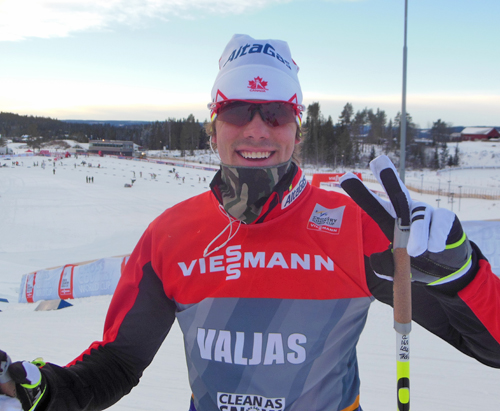 A story of Lenny make all of us laugh.

During his high school years, Lenny started training for cross country on alpine hills at Th ornhill’s Uplands Ski Hill. Every day after school, when the ski hills were closed, Lenny would toss his skis in the car and drive to the hill. He would hide his car so no one can see it and then walk up and ski down the freshly groomed hills, over and over again.

Th e groomer never knew who was making the tracks on his nicely groomed hills – little did he know it was the hardworking, young, naughty teenager from Toronto. Only once was he caught when a helicopter found him with their searchlights.

Although both parents were born in Toronto, Lenny has deep roots in Estonia with both sides of his grandparents being Estonian. As the middle child of three siblings, Lenny grew up in Toronto’s Estonian Club House on Cambridge Avenue. Because of international races, as well family trips, Lenny has visited Estonia many times.

As part of an athletic family, his older sister is on the National Beach Volleyball Team. He comes down to the Beaches very often to watch his sister play volleyball at Ashbridges Bay. His 16 year old brother seems have a passion for many sports such as volleyball, skiing and mountain biking – still awaiting to fi nd his calling.

Lenny’s love for skiing took a serious shift after high school. He moved to Quebec, enrolled in one of the National Team Centres and starting intense training.

Almost all national athletes train there, but not everyone completes the program or becomes part of Team Canada. It was during this time at the National Team Centre that his skiing really started to improve. He learned how to maximize his strength and find a balance between the physical, mental and technical sides of national competition without burning out.

While at the centre, training with other athletes who would become World Champions, Lenny realized his dream was to make the national team and compete in world-class competitions, such as the World Cup and the Olympics.

However, his Olympic dream did not become a reality overnight – or even in a few years. Four years ago, he missed competing in Vancouver by just one spot. That kicked his motivation into full gear and he was determined to make it to Sochi in 2014.

Just to be sure he pre-qualified in early 2013, he fought hard at the Switzerland and Italy Cup and won two medals. It was these two podiums that qualified him to be on the National Team. After years of following his dream to the international podium, boarding in many places, Lenny still calls Toronto his home and his favourite place in the world.

He treasures every bit of time with his family and friends when he is here. He now spends most of his time in Canmore, Alberta – the training base for him and his team. Living just five minutes away from everything he needs for his daily training, and easy access to doctors and physio/massage therapists, he feels very fortunate that he can get the best from the professional training centre.

As the Games get closer, 21/2 hours of daily training is how he is preparing his first Olympics. Maintenance takes a big part of his day with physical and mind conditioning.

His Olympic team is like his family. The four men have been training and competing for 3-4 years and have become very close friends. This closeness is a big part of the team’s strength. Their skills complement each other – thus building on each other’s strengths.

The athletes always are front and centre, but there is a whole team behind them to ensure their success. The team of technicians plays a crucial role in getting their 400 pairs of skies tuned and ready for racing. Skies need to be prepped for the conditions for that day. No matter how prepared the skier is, if their equipment is not geared for the conditions, their chances of success are reduced.

Another important member of the “behind the scenes” team is their chef and nutritionist. The team will bring their own food and a chef. The daily menu will be pretty much what it is now.

When asked what would be his advice to young people wanting to follow their dreams, he said; “stick to your ideas and continue to work hard.”