UPDATE: Canadian Athletic Penny Oleksiak has achieved great number of honers since this article was published in July 2016: 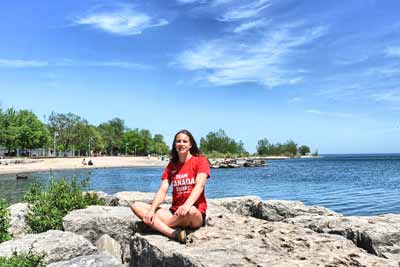 The 2016 Olympic Games in Rio de Janeiro is sizzling and the countdown to the opening has begun.  There is just one more reason to cheer for our Canadian Olympic Team – a young swimmer from Kew Beach, a student of Monarch Park Collegiate, Penny Oleksiak who is going to Rio this summer. As the youngest Canadian Olympian, at age fifteen, Penny will compete with the world’s best in six swimming events at the Summer Games!

Participating in the Olympics marks the first “senior” event for the young swimmer, who took the world by storm last year with 6 World Junior medals from the FINA World Junior Swimming Championships in Singapore. Her ranking makes her a serious contender for a medal in Rio.

“She hit her stride a little early,” laughs her mom, Alison, who also is a swimmer. “She was planning to compete in the Tokyo Olympics (when she’d be 19), but now she’ll do Rio first. Then she’ll finish high school and train for 2020.”

Penny only started learning to swim at the age of 10 and got serious about the sport at 12. She then started to practice and train at Toronto Swimming Club. The Oleksiak family is no stranger to the life of an athlete. Jamie Oleksiak, Penny’s older brother is an NHL hockey player with the Dallas Stars, her mother a swimmer and her father a basketball player. Penny’s sister Hayley, a graduate of Malvern Collegiate, now studies at Northwestern University and recently rowed in the 2016 NCAA Championships.

Penny attended Kew Beach Public School and Glen Ames Senior Public School. This year at Monarch Park, she had to figure out how to accommodate her travel schedule along with fitting in six hours of daily training and going to school.  She did the fall semester in class, but for the spring semester she combined online learning with classes when she was back in Toronto. School work sometimes seems easy, as Penny said, but other times after a long hard day of training, she just doesn’t feel like sitting down to complete her homework – she would let it slide, only in rare occasions. 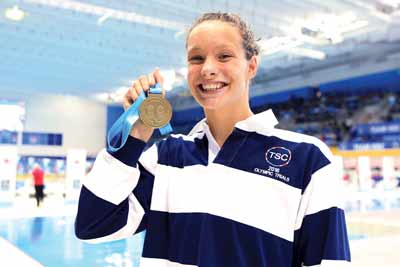 “We’ve learned from having two other athletes in the family,” explains Alison, Penny’s mom, “the importance of balancing life as a competitive athlete with being a regular teenager. Sometimes this means coming back early from training to go to the prom, or taking time to hang out with her friends, have a sleepover.” For example, Penny enjoyed Raptor’s Games. And just like most teenagers, she usually goes for simple fast foods such as Ali Baba, Subway and Tim Hortons.

Always interested in a wide-range of sports and physical activities from skating to ballet, T-ball, volleyball and gymnastics, it was only a year and a half ago that Penny decided to focus on swimming. The two activities she continues to enjoy in addition to swimming are volleyball and cross country.

For competitive swimmers to be on top of their game, it’s essential to train both inside and outside of the pool. Her training combines both, time in the pool as well as land training to build muscles, endurance, balance, etc. When in Toronto, she swims at pools either at the University of Toronto or Toronto Pan Am Sports Complex in Scarborough. Personal Fitness is done at her school and cross-fit facility on the Danforth. 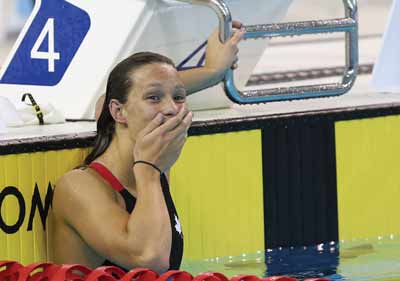 Qualifying for the Olympics itself is a feat. Swimmers must finish in the top two in each race, plus receive an “A” standard from FINA (the international governing body of swimming). Penny, a sprinter, did very well, beating a previously held Canadian record and finishing with a ranking of 6 in the world.
For the month of June Penny will be in Rome and Barcelona for training and competitions. This will be her first trip to Europe ever!

This summer her family will be in Rio to cheer her on, thanks to her brother, NHL player Jamie, who is flying their mother, father, sister and himself so they can be there when she competes.

All Beachers will be cheering her on with her family when she competes, starting with qualifying rounds on August 6 to hopefully finals, ending on August 14.

Interestingly, the youngest male on Canada’s 2016 Olympic team is also from the Beaches. Eighteen-year-old Javier Acevedo, from Neil McNeil High School, who qualified for the men’s swim team. Both swimmers know each other after competing at the World Juniors.