Symphony! of Stories – Sultans of String 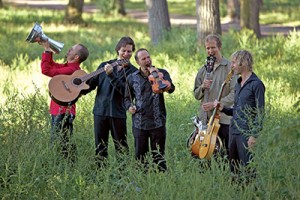 Those attending a sold-out concert at Koerner Hall in Toronto on December 1st, were fortunate to have experienced the award winning Sultans of String celebrating the premier of their forth CD, “Symphony!” To perform the album live, the fi ve band members were joined by the Cathedral Bluff s Symphony Orchestra.

Th is was a project three years in the making. Their original instrumentals off er a layered tapestry of rhythms and melodies combining Spanish Flamenco, Gypsy Jazz, Middle-Eastern Folk, Celtic Folk, and Cuban percussion. Many of the songs tell stories of people and places in Canada and around the world. The music is full of dramatic energy, technically astounding, and quite playful. Before leaving on a whirlwind five-state US tour, we took the opportunity to speak with group leader, JUNO Award Nominee, and Beaches resident, Chris McKhool. 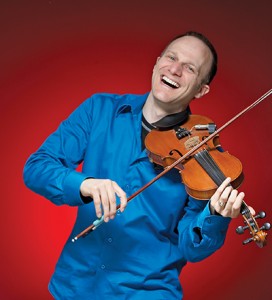 “I could probably sing a scale before I could talk,” admits McKhool, who was raised in Ottawa, where his mother taught piano in their home. His older brother and sister both took piano lessons; it was decided at age seven that Chris would study another instrument: “We settled on the violin.”

He learned to play by ear and later received training at the Royal Conservatory. Th ough classical music was emphasized at home, as a teenager Chris began exploring other genres. “I realized you could learn three of four chords on the guitar and play pretty much everything on the radio, so I started writing my own songs. I played in various folk rock bands, playing my own music on guitar, and then started getting interested in jazz.“

Chris moved to Montreal at eighteen; at 28 he came to Toronto. “I moved direct to the beaches; I’ve been here ever since. It’s such a beautiful part of the city. I love the world class stores and great access to the beach, the water, and trails. It’s got a more laid-back feel than downtown.”

“Most people think because my name is McKhool and I play violin or fi ddle I must be Irish or Scottish, but actually it would be pronounced ‘Mahool’ in Kfarmishki, Lebanon, where my grandparents are from.”

As an adult, Chris began to take greater interest in his heritage and decided that music could off er some insight. He attended the Arabic Music Retreat in Massachusetts and began taking lessons from master players.

In what he describes as “the trip of a lifetime,” he and his eighty-year-old father flew to Beriut where they located his father’s closest living cousin. They also found the actual stone house where his grandfather grew up. Their reunion was celebrated by great Arabic feast.

The memories of that trip were the inspirational spark that he used to compose ‘Road to Kfarmishki’.

Chris McKhool met his songwriting partner, rumba flamenco guitarist Kevin Laliberté, in 1992 while playing jazz in a small venue. “We ended up getting a bunch of gigs where we had three hours to fill and only knew a handful of songs, so we’d make a lot of music up on the spot.” Though they initially called themselves ‘Laliberté and McKhool’ — “Which sounded more like a law firm than a band” — in 2007 they changed their name to ‘Sultans of String’, began getting better gigs, then released Luna, their first CD. Adding professional jazz bassist Drew Birston, the group became a trio.

With the release of their second CD, Yalla Yalla in 2009, flamenco guitar player Eddie Paton joined the group, along with Cuban percussionist Chendy Leon. “By the third album, MOVE, we were arranging a lot of the music together as a band,” discovering a unique artistic voice.

“The strength of the music comes from everyone throwing in their opinions and ideas.” When writing a song the band will try different arrangements and styles just to see which suits the song best. The influences from around the world are brought together provide in their music a real eclecticism and personality.

Though he loves traveling, “It’s a great way to learn about the world and other people,” Chris admits it’s not easy to be on tour. “We’ve got concerts into 2015, but we don’t do six months on the road in the van because we love our wives and children too much. We’ll hit a market for a few days and then come back.”

Internationally successful, the Sultans remain a Canadian band. In fact, they consider themselves a Toronto band. The city is so diverse, with numerous influences and world class musicians coming together from all over the globe. When asked about future plans, Chris said he would like to produce an album with guest-star vocalists.

He’d also like to collaborate with a sitar player that he’s recently met, playing music influenced by India and Pakistan.

“This Symphony! project has been so huge, so complex,” said Chris, “that I’m intrigued by the idea of stripping it right down and doing a duo album with Kevin. All of these ideas become projects and tours that take on a life of their own.”

The band has been juried onto the first ballot of the 56th Annual Grammy Awards.  Officially nominations will be announced December 6.