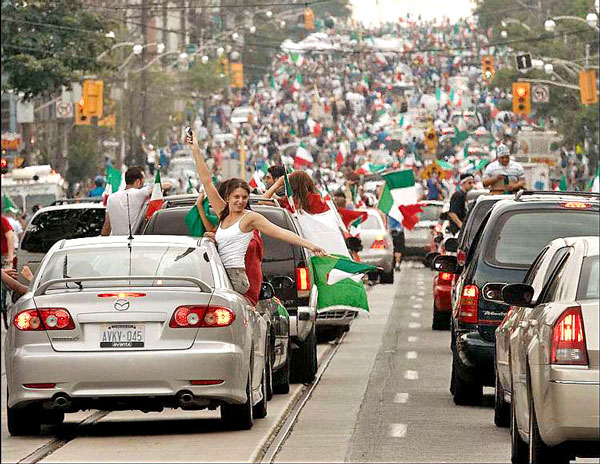 On July 11, 1982, around 300,000 people flocked to Toronto’s Italian neighbourhoods to celebrate the first Italian FIFA World Cup of Soccer tournament victory in 44 years. The huge, happy gatherings of Torontonians, regardless of ethnic background, solidified a love affair that the city has had with its Italian Community for over a hundred years.

The long history of Italians in Toronto began in the late 1800s. In fact, by 1915, there were about 12,000 Italians living in the city. They worked on building the city during one of its biggest growth periods, making streets, digging sewers, working on construction projects, and expanding transportation routes.

Torontonians today, however, are more likely to remember the third wave of Italian emigration to the city, from 1950 to 1960. By the 1980s, Toronto’s Italian population had reached 300,000 and was making a significant impact on the city’s cultural fabric. 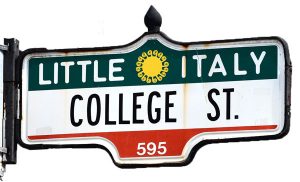 Italian contributions to the city are too numerous to cover. From construction workers to building architects, construction managers and building owners, the Italian community became a key part of the city’s construction industry, and played leading roles in workplace safety and labour relations.

Along with the arrival of Italian families, the city soon saw the appearance of green grocers selling fresh fruits and produce, and bakeries with crusty bread. There were butchers shops with spicy sausages, meats, olive oils and balsamic vinegars, and new spices and cheese to try. At first, these shops catered to Italian families, but soon everyone was seeking out their favourite Italian food shop or restaurant.

Toronto didn’t even know what pizza was in the 1950s (or at least, knew it as only “exotic” food). The first restaurant was Vesuvio’s, in the Junction, after Dominic, his brother Ettore and their father Rocco Pugliese came to Toronto and opened their first restaurant in 1957 and introduced pizza to the city!