Traditional Territory of the
Mississaugas of the New Credit

As the City of Toronto grows and expands with newcomers settling into the city, Torontonians are more than ever to be reminded and connected to our city’s Aboriginal heritage. The name Toronto first appears in the historical record as the “lac de Taranteau” on a map of southern Ontario produced in 1670 by Father René de Bréhant de Galinée.  At that time, the name referred to Lake Simcoe and not the area known as Toronto today.

There are variations of Toronto such as Taranteau found and recorded. In the 1720s, “Toronto” became associated with a post by the mouth of the Humber River, the starting place for the “Carrying Place,” the canoe and portage route from Lake Ontario to the waters that flowed into the upper Great Lakes. 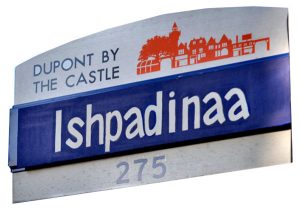 For generations, the Mississaugas (or the Ojibwa) lived on the north shore of Lake Huron. But by the 1700s, this First Nations tribe had been forced to move south to the lands around present day Toronto in search of hunting lands. They occupied the land from Ashbridges Bay to Etobicoke Creek, and fished on the Humber and the Don Rivers, particularly where these rivers entered into Lake Ontario. They also revered the Toronto Islands, naming them a place of healing.

When the town of York was settled, once again the Mississaugas had to find new places to hunt and fish. They settled into a new area we know as the Six Nations territory near Brantford.

The Mississaugas were experts at cultivating various wild plants for food and as medicine. Without modern drugs, they became skilled at knowing how to use plants as healing agents, many of which became used eventually as European medicines. For example, the mixing of wintergreen leaves and red willow bark was an early form of aspirin (when the leaves are distilled, they impart an oil, which is made up of 99% methyl salicylate, the chemical compound upon which all aspirin products are based). They also mixed wild cherry bark with berries as a cough syrup. Wild cherry bark is still used in cough syrups being sold we buy in our drugstores!