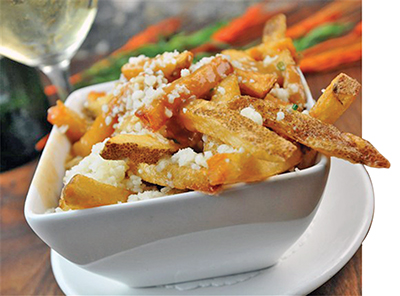 While Canadians may not be able to take credit for world-class foods like sashimi, guacamole, or lasagna, we do have one dish that we can proudly claim as our own: French fries and cheese curds smothered in gravy – otherwise known as poutine.

While its hometown is in dispute to this day, one thing’s for sure. Our country’s much-loved dish is definitely Quebecois. Created in the 1950s or 60s, poutine got its name from the French slang for “mess.” And for decades, it was just that. A delicious mess to satisfy growling stomachs after hockey practice or hungry college kids in the middle of the night. And it was cheap too. A plate at the local greasy spoon could go for as low as $5. It’s safe to say poutine came from humble beginnings.

But as this splendidly sloppy snack spread from its native Quebec to francophone areas in other provinces to big cities across Canada, its popularity rose slowly—but surely. With the 21st Century came a newly elevated status. (I imagine some of the best Canadian chefs holding a secret meeting, during which it was decided that this delicious dish would no longer be condemned to a life of fast food.) Soon, poutine was featured on menus at some of the finest restaurants across the country. On one condition, it seemed. The poutine had to fancy up its image.

A $5 dish no longer, poutine has transformed from fast food to fabulous feast. From frog to prince, some might say. Once a beautiful mess, our nation’s beloved dish is, at times, almost unrecognizable. But still, it will always be ‘just poutine’ to me…