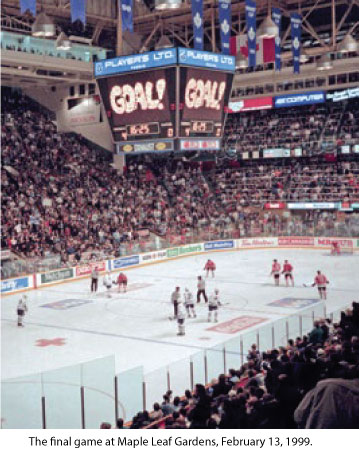 Talk with any long-time Torontonian and theyll have a story about Maple Leaf Gardens. At one point in their life they attended a hockey game there, perhaps high up in the greys where all the shouting and celebrations happened. Or they were at one of the 3 historic Beatles concerts held there in 1964, 65 and 66.

World War 2 veterans recall how rallies were held in the huge arena to encourage enlistment in the 1940s and the support Victory Bonds; some may have attended Winston Churchills speech there in 1932. Others watched the Ice Capades or being there for the boxing match between the legendary Muhammad Ali versus George Chuvalo.

Blending both Art Deco and Art Moderne architecture, the imposing building at the corner of Carlton and Church Street still reminds Torontonians of its glory days. Its beginnings, however, can be traced back to one man in particular who was determined to give the newly named Toronto Maple Leafs a proper hockey arena.

Businessman, sports enthusiast and military hero, Conn Smythe, loved hockey. He played and then coached as a young man. When he made his fortune in the gravel business during the 1920s, Smythe bought the Toronto hockey team, the St. Pats and renamed them the Toronto Maple Leafs.

The NHL was new at the time (formed 1917) and some of the other teams had new arenas with modern amenities. Smythe had a vision to create a state-of-the-art ice palace for his Maple Leafs hockey team in downtown Toronto.

One of the Original Six NHL teams, the Toronto Maple Leafs have won the Stanley Cup 13 times; 11 as the Maple Leafs, one as the Arenas, and one as the St. Patricks. The team has been one of the most successful in professional sports both financially and in terms of its loyal fan base  Leafs Nation. Home games played at the Air Canada Centre are usually sold out. 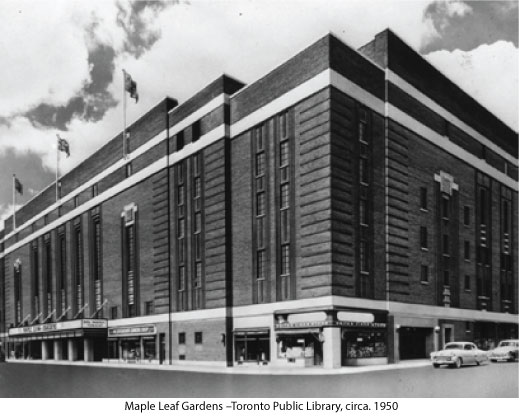 Three steam-powered shovels excavated the site and two concrete mixing plants on location provided the building material  13,500 cubic yards of concrete! The Gardens also was made from 13,000 tonnes of steel, 13,500 and 1.5 million bricks and tiles. It was completed in five months and twelve days, often referred to as a miracle of engineering.

For all its size and glory, Maple Leaf Gardens always just resembled an oversized local hockey arena  and thats why people loved it!

On opening night, November 12, the Toronto Maple Leafs played the Chicago Blackhawks in front of a sold out crowd, with the best seats costing $2.75. Although the Leafs lost that night, they did win the Stanley Cup that year.

From the moment Maple Leaf Gardens opened, its annual schedule of events included much more than just hockey games and sporting events. For decades, Maple Leaf Gardens remained the largest indoor venue in Toronto. There were countless orchestras, jazz bands and dances in the 1930s and 1940s. Through the 1950s and 60s, opera, ballet and circus performances filled the arena. Elvis Presley played his first concert outside of the USA at the Gardens, followed by every major rock group. Political rallies and religious gatherings took place there, including evangelist Bill Graham.

One of the most recognized and talked about features in the Gardens was the gondola, a small booth suspended bout 20 meters above the ice intended for radio broadcasting. When first constructed, the gondola could only be reached by a catwalk that had no guardrails and an almost vertical ladder to descend to the gondola.

End of an Era

Into the 1990s, the building began to show its age, the Leafs final game in the Gardens on February 13, 1999 was lost to the Chicago Blackhawks as it had been on opening night. The adaptive reuse of Maple Leaf Gardens, completed in 2012 by Ryerson University and Loblaws, altered the arenas interior but respected the historic character of the buildings exterior.

Today, the home of the Maple Leafs is at the Air Canada Centre, built for both Maple Leafs hockey and Raptors Basketball. The first Maple Leafs home game took place on February 20, 1999, versus the Montreal Canadiens (and the Leafs won).